A Queen from the North by Erin McRae & Racheline Maltese 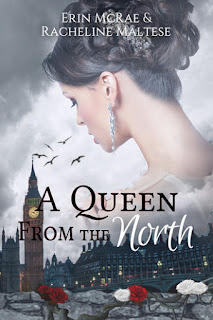 I don't remember who recommended this book to me a couple of months ago, but am I ever glad they did.  It was delightful!

Set in an alternate universe... well, here's a blurb - In a United Kingdom where tensions between the houses of Lancaster and York did not end with the War of the Roses, Lady Amelia Kirkham, grad school reject and youngest daughter of a Northern earl agrees to enter into a marriage of convenience with Arthur, Prince of Wales, a 39-year-old widower with an ailing father. Together, they will either unite England’s North and South for the first time in centuries… or cause the kingdom’s fall.

So, in many ways, it felt like a positive rework of the Charles and Diana courtship (I have issues with the whole Chuck and Di thing.) and that might have bugged me more had I not fallen for the Prince of Wales myself within the first three chapters. *LOL* And in Amelia I actually found a young woman protagonist that I didn't want to throttle. And I liked the way their love story played out. I especially enjoyed the part about Canada, although it seemed to me that making Toronto appear the capital of my country was a bit much.

What intrigued me the most, I must admit, is the alternate history of the story as well as the faint bits of magical mythology that surround the tale. I went hunting around and found out that the writing duo has begun work on the second book of the series and it seems like the myth and magic might take on a more prominent role. YAY!

So yes, I really enjoyed my read and am eagerly looking forward to the next book.
Posted by Evaine at 11:28 PM