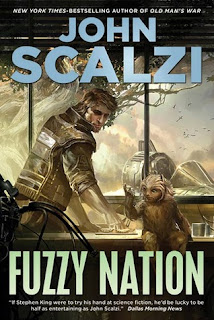 I have discovered that I like John Scalzi's writing, so when I saw that he had done what he calls a 'reboot' of one of my favourite SF stories - Little Fuzzy by H. Beam Piper - I thought, well, okay, I can read this.  Also, a couple of my friends said they enjoyed it.

Yes, for the most part.  Like I said, I enjoy Scalzi's writing.  Which is a good thing, because all the lawyer talk, the scientific talk etcetera, could have been very dry and unappealing in another author's hands.

There are a lot of differences from the original Piper novels. A lot of characters missing or retooled into other, maybe composited, characters.  The plot, while remaining true at its heart, is focused much more on the legal aspects of the story as well as the um... not-niceness of Jack Holloway.  All that is fine, but what I missed was the interaction with the Fuzzies.  How Jack grew to accept and care for them as people, not pets.  How the Fuzzies showed their sapience. I remember a scene in the original about a funeral that's stuck with me all these years.  I missed those scenes in this book.

So, yeah, I enjoyed it and would probably recommend it to others, but I wasn't as satisfied as I'd hoped I'd be.  I would totally direct people to read the original Fuzzy books by H. Beam Piper, though.  :)
Posted by Evaine at 1:42 PM