Under His Protection by LaQuette 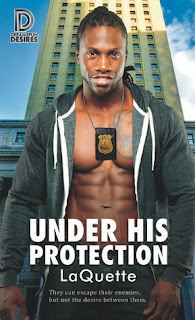 So, what we have is a book that's really all about emotion. Both men, Elijah and Camden do not trust love.  Well, they're afraid to expose all the emotional parts of themselves to a romantic partner. Both for different reasons.  But boy oh BOY is the physical attraction strong.  Like... Skywalker Force strong.

Elijah and Camden had a one night stand 5 years ago and it was SO POWERFUL and their connection SO INSTANT that neither one has been able to forget the other.  I usually have a bit of a problem with this trope, but I have to tell you, the author writes it so brilliantly that it worked for me for the most part.  Now the forced proximity trope is one that I do enjoy, so the fact that detective lieutenant Elijah has to stash ADA Camden away so the bad religious zealots can't assassinate him was an easy thing for me to deal with.  Throw in the perfect seasoning of Elijah's family and we have a really good story with lots of emotion and growth in between the hot, uber hot, bouts of sex. I'd have preferred more of the former and less of the later in the mood I'm in.

Now, the thing is, I was not in the mood for high erotic content in my romance book this time.  I wanted the whole detective, action, thriller, suspense type of book.  But, LaQuette - an author new to me - writes so well and so enjoyably that I didn't really mind at all.  I only had one real complaint about the whole thing and that was the constant use of the MCs names.  Honestly, I know which character's POV I'm reading and I know how to differentiate his hands/legs/mouth/cock/eyes/whatever from the other dude's.  I tried rereading a couple of the paragraphs substituting him/his for the character's name and you know what?  It worked a charm.  She didn't need to continue naming which guy was which because her writing is good enough that you just know.

Something was brought home to me about how I read while I was going through this book.  I'm a visual reader, meaning I see the story playing out in my mind's eye as I read.  And as such, I need to have descriptions of the characters - at least the MCs.  It lets me sink into the story more completely.  I say this because having finished the book, I still don't know if the author intended Camden to be black or part black or what. All I know is that his skin is light and his eyes blue and his hair black.  So I kept seeing Jesse Williams in my mind's eye. Bear in mind that I'm the woman who insists that Mr. Clark from the Tom Clancy novels is a big, black man even if Willem Dafoe played him in the movies and is supposedly bang on.  *LOL*  Anyway, this bugged me.  I wanted to know Camden's racial makeup so I could picture him properly.

So, that being said, this was not the book I expected, or the book I wanted to read, but I did enjoy my read and was very, very impressed by the author's ability to make me do so,  LaQuette is definitely on my radar now!
Posted by Evaine at 2:51 PM