A Fashionable Indulgence by KJ Charles 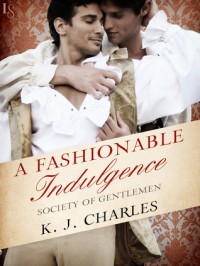 5 Stars, yes indeed! I loved it, pure and simple. KJ Charles is one of my favourite authors and she most certainly did not disappoint with this first entry into her new Society of Gentlemen series.

A Fashionable Indulgence tells the story of Harry Vane and Julius Norreys.

When he learns that he could be the heir to an unexpected fortune, Harry Vane rejects his past as a Radical fighting for government reform and sets about wooing his lovely cousin. But his heart is captured instead by the most beautiful, chic man he’s ever met: the dandy tasked with instructing him in the manners and style of the ton. Harry’s new station demands conformity—and yet the one thing he desires is a taste of the wrong pair of lips.

After witnessing firsthand the horrors of Waterloo, Julius Norreys sought refuge behind the luxurious facade of the upper crust. Now he concerns himself exclusively with the cut of his coat and the quality of his boots. And yet his protégé is so unblemished by cynicism that he inspires the first flare of genuine desire Julius has felt in years. He cannot protect Harry from the worst excesses of society. But together they can withstand the high price of passion.

I was beginning chapter 3 and I was already in love with the whole cast of characters, each one of them unique and may I say flawed in their own special ways. Real people, I think. :)

It was as if Georgette Heyer had decided to write a romance about two men and add in a few more racy scenes than her norm. :) And then about halfway through the book, things get serious and it's no longer a story of manners and such, but almost a mystery/adventure. And add in some serious political insight too.

This is one of those books that make me wish I could write an insightful, educated, knowledgeable review but I can't. And I really regret that, because I think KJ is a supremely talented writer and would love to do her justice. But, I can just say that I adored the book, loved the story, adored the characters and I cannot WAIT for the next book in the series. :)

EDT: I forgot to mention that I'd been saving this review/rec post to add to my own because it says things I wish I could. Check it out. :)