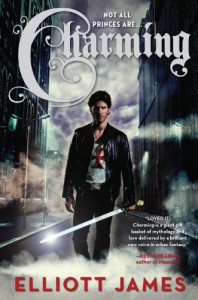 John Charming is no prince. Yet. He's a half-breed werewolf as well as being a trained Templar knight.

Charming is one of those Urban Fantasy paranormal, supernatural hunter type books but told from the POV of a guy, instead of the ubiquitous woman. At least what I figure is ubiquitous judging from all the paranormal cover art that I see.

I liked the premise. I liked most of the characters. I was okay with the story of the vampire hive etc... What I wasn't okay with was the clunky love story that I didn't believe for a minute or the co-plot with the 'psychic'. I also found the action sequences to be too much... too many words... too long. I don't get the same charge out of them as I do when I see them on the TV or movie screen.

I expected more out of this book and I'm really glad I managed to get it on sale. Should the next one in the series go on sale, I wouldn't be averse to picking it up, but I won't go seeking it out.