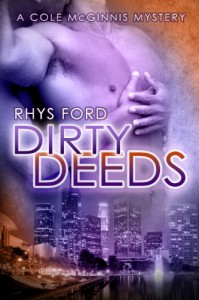 #4 in the Cole McGinnis series is the best one yet, in my opinion. The relationship between Cole and Jae is growing, although I will admit that I'd have liked a little more conversation between them and a little less sex. Rhys Ford writes deliciously wonderful sex scenes but too much of a good thing tends to take away some of that goodness.

In this book, we find out a lot more of what happened to Cole back when he was on the police force and his partner murdered his boyfriend and tried to murder him and then killed himself. At least I think he killed himself. I have to say, some of the story and motivations surrounding this part of Cole's tale is still rather murky to me, but I think it's supposed to be. At least I hope so! *LOL*

I would have liked to see a little more of Cole's brothers and more of Jae's family. I know the next book is to feature Ichi and Bobby, Cole's best friend, so hopefully there'll be more family type stuff.

And I've begun to cast the Cole McGinnis movie in my head when I realised that while reading, anytime I'd read about Bobby, I was seeing Christopher Meloni (Law & Order SVU, Oz etc...). I also tend to see Cole as Ian Anthony Dale (Adam from H50) even though I think that Cole isn't supposed to be quite so Asian of feature? I can't remember. *LOL*

Anyway, I totally enjoyed the read and am looking forward to the next one. :)