Home the Hard Way by Z. A. Maxfield 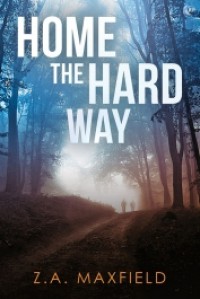 This book came out in July of 2014 and I've had it in my TBR pile since then. Why did I leave it unread for so long! *LOL* Seriously! I was up very late last night reading it, wanting to finish, but I just couldn't - my eyes kept closing despite everything, so the first thing I did this morning, before even getting the coffee going, was to pick it up and read the last 4 chapters.

I don't know why there wasn't more buzz about this last summer, it's really a good read, but I think that some of Z.A. Maxfield's (aka ZAM) titles aren't for everyone because there's an undercurrent of something dark, something broken, something very real that is never completely resolved by the end of the book - and THAT'S OKAY! It's real and I love it! In some ways it made me think of Lost and Found which I absolutely adored.

Both of ZAM's main characters - Dare and Finn - are flawed. Neither is perfect and at times both can be quite unlikable. But they're interesting and real and that's what makes me so enthralled by their story. I wanted to shake Dare so many times while I read because his demons are so recognizable and so ordinary and I guess I found it out of place in the supposed hero and wanted him to rise above them, but even though he tried, he kept slipping and it was so honest and real... well - it worked bigtime for me.

And Finn, my God, his tightly wound, walls up, protect the inner Finn was so believable, so logical and so well done that I teared up on more than one occasion. The scenes with his aunt - OMG! - they were so gutting and filled with emotions. And it seems on the outside that Finn is so together, so cool, so capable, but like so many people, he really isn't. Stubborn git!

The mystery. The suspense. The WHAT THE HELL IS GOING ON HERE??? It was really well done. There were twists and turns throughout the book, a couple of biggies that had me going... OMG, REALLY?... and the final twist, the end of the mystery caught me totally by surprise.

And ZAM also does a lovely job of her supporting characters. They're all unique, have depth and serve to move the story forward all the while being real people.

I think that one thing I really appreciated about Home the Hard Way was that the ways the characters were challenged or damaged/hurt were, I guess I want to say, normal and run of the mill. There seems to be a trend today in M/M or maybe all romance, that one or both of the characters has to be afflicted, or suffering from, or dealing with, or conquering, or existing with some form of disability be it mental or physical in order for the story to have some what, ... deeper meaning? a roadblock to conquer? be a symbol of diversity? show that everyone deserves love and an HEA? Which is all well and good, I'm all for diversity and I love many of those books, but I like to see stuff I know and recognise as having impacted my own life every once in a while. (Yes, that's my privilege showing probably, but it's my blog and I can give voice to it.)

So all in all, this was a great read with terrific characters, a good mystery, some hot sex scenes, depths of all kinds of emotions and an ending that didn't solve All The Problems Ever with a hug and a kiss and an I love you.