The Emperor's Blades by Brian Staveley 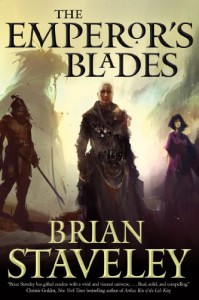 Chronicle of the Unhewn Throne - Book 1

I'd had this book on my 'to buy' list since the spring, I think, but I never managed to fit it into the book budget. Finally, my son gave it to me for Christmas - YAY!! I was looking forward to reading it, so it was the first of my Christmas books that I cracked.

It began slowly, I have to say, but I wonder if that's because I'm more used to reading quick romances where you jump into the plot of the story right away and there's minimal backstory needed or setting up required. Whatever the reason, the author takes his time to introduce the three main antagonists, the three children of the freshly-murdered emperor. We get to know them, the boys mostly, through looks at their daily routines and their friends and mentors. Kaden is the eldest who has spent the past 8 years training with the monks up in the mountains and Valyn, the younger brother, who has spent that time with the Kettrel - an armed force of elite soldiers who basically use giant raptor-type birds as their war vehicles. Both boys have their challenges - many of them. We also meet their sister, Adare, who has been named to the high post of Finance Minister of the Empire. I think she's older than Kaden, but this being a patriarchy, only the males inherit.

About half-way through the book, I took three days out to re-read another book I had promised to read, and when I came back to this one, the action soon began to pick up. Some things became clear as both young men come near to the culmination of all their training, but there are still so many questions to be answered. Then BOOM! The action picks up to an almost frenetic pace - at least where Kaden and Valyn are concerned. Yeah, things are happening to Adare as well, but we get nowhere the in depth storytelling we get for the boys. I think that will be addressed in the next book - in other words, I don't think this is a slight to the female antagonist. Her time to shine will definitely come, I'm sure.

To sum up, this was a super read! I loved it. I didn't even mind that the main characters were basically teenagers! To me they 'read' older. The secondary characters were distinct and nicely fleshed out and I have a couple of favorites, especially Valyn's comrade, Annick and Kaden's friend, Akiil. There is also the very Yoda-like Tan, one of Kaden's mentors and The Flea - another member of the Kettrel. I have hopes/suspicions about The Flea that I'll have to see about in the second book. There is a cliffhanger, yes, and many unanswered questions but y'know, I didn't really mind the way I usually do. I'm just looking forward to book 2! It's out next week, I think. :)

You like good, juicy fantasy? Give this a try. :) I measures up to the hype, I think.